While on vacation in September, I broke my foot in three places. I spent two days in Lisbon before flying back to the States, and it was a sad affair. Instead of the planned sightseeing and city tours, I was laid up in the hotel for most of that time. Learning to use crutches is difficult, but using crutches on sidewalks with centuries-old cobblestones is even more of a challenge. I stayed in our hotel’s lounge while my cousin went out to see the city sights. On the first day she came back and reported that there was one restaurant close to the hotel, and she thought it was near enough that I could make it on crutches. “I don’t know what kind of restaurant it is and whether they have anything for you though,” she said. I was so excited to leave the hotel and experience something (anything!) of Lisbon, I was willing to try. Even in non-veg-friendly restaurants, you can usually at least order a salad, right?

We decided to try it. After a herculean effort on my part maneuvering over the uneven sidewalk stones, we made it to the restaurant door. What kind of restaurant was it?

I laughed out loud. And enjoyed a heaping plate from the buffet: 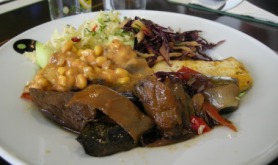 When in Lisbon, check out Green Pepper at 14 Avenida José Malhoa. The food is fresh and inventive, and they also have a wide selection of yummy drinks. The servers are friendly and attentive. They made my day.